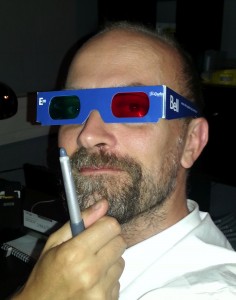 I am a VFX supervisor and skilled 2d / 3D generalist, with over 20 years experience leading teams in animation and vfx. I’m a multi-specialist with professional credits for:

I supervised CG on The Fades and picked up the RTS award for best effects digital along with Alexis and Dan of Lexhag.

I am a Fusion product specialist and demo artist for Blackmagic Design.

At Rebellion I worked as an Animation Supervisor and Technical Director.  From the early days of maquettes and stop motion, to the latest motion capture and CG characters.   I built their animation department and character pipeline.

A long time ago I went to Abingdon school in Oxfordshire. I studied Art, Physics, and Mathematics at A level. I won a prize for design, and strangely a prize for boardgaming.
After being persuaded that there was of course no future in art, games, or computing… I flew the nest, and went to Bristol University to study Aerospace Engineering (class of 1991).
When I left university that I realized I didn’t want the safe future I’d been pushed towards. Maybe it was time to figure out what I wanted to do…so of course I formed a rock band. Several years later, and a few near misses on that ever elusive record deal, my luck was about to change. I met a game designer at Rebellion (I met her sword fighting as it happens but that is another story…).
I was blown away. Being a games designer was probably the coolest job on the planet (and better paid than music). So I got my CV together and well…..Shortly after I started the first PS1 dev kits arrived… Within a few years I was lead animator on the BAFTA nominated Aliens versus Predator…. No future in art, games, or computers … Strange how things turn out.
So far I’ve enjoyed a 15 year career in Computer Games and TV. Now with Digital Cinema production the next 15 years promises to be even more exciting.