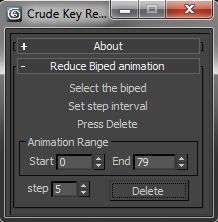 Motion capture is great but it almost never quite fits the location or the character rig. Often it requires a little tweaking or, worse still ,modifications are needed that take the data further and further from the source file ( Rifles are changed to pistols etc).

Animation layers are useful but only get you so far until your simply fighting the data trying to figure out when and where things are happening.

Eventually we have to dismantle that wall of motion captured key frames into something more manageable.

The Crude Biped key reduction tool does just that. It’s not the most sophisticated of algorithms. But, it gets the job done and leaves you with nicely lined up key-poses. To use simply:

Its now part off my scriptpack . Check out the installation instructions here.

Turn Off Separate FK tracks before using the tool

There various methods for importing motion capture data to biped. Some times Separate FK Tracks is left ON in the Biped dialog. Make sure you turn it OFF before using the maxScript ( … at some point I might make this an automatic feature of the tool. )

I’ve written a better tool that looks for turning points in the animation. Again it reduces the keyframes to keyposes but now preserves the extremes and the timing of the motion. Unfortunately this tool was written commercially and is unavailable for free release.